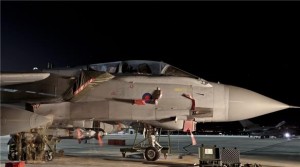 British fighter planes have struck suspected ISIL targets in Syria, just hours after MPs approved a motion authorising the use of military force against the group.  A British Ministry of Defence spokesman confirmed to Al Jazeera that Tornado jets had returned to base after conducting combat missions against the group on Thursday. Earlier, the Reuters news agency reported that four warplanes landed at RAF Akrotiri, the base used for British air strikes on fighters belonging to ISIL, or the Islamic State of Iraq and the Levant group, in Iraq.

Cameron was backed by dozens of Labour MPs who broke ranks with leader Jeremy Corbyn, who is opposed to the military intervention. Addressing parliament on Wednesday, Cameron said high-precision, laser-guided Brimstone missiles attached to the Tornado GR4 bombers would help to make a real difference by hitting the ISIL capital of Raqqa and its oil-trading business.

France and the US are already bombing the fighters in Syria, while Russia has bombed mainly other armed groups battling the forces of Syrian President Bashar al-Assad. Cyprus, which lies about 100km away from Syria, is the closest European Union member state to turmoil in the Middle East.