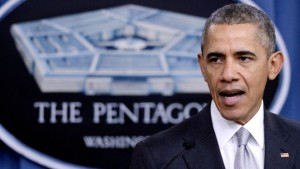 The US is hitting so-called Islamic State (IS) harder than ever, President Barack Obama has said in a speech at the Pentagon. More air strikes were launched against the group in November than in any previous month, he said.

In recent weeks, the US-led coalition has killed a number of its leaders and attacked oil facilities it controlled. Mr Obama has been seeking to reassure the public following an attack in California that killed 14 people.

The two suspects were a radicalised Muslim couple who struck weeks after the killing of 130 people by Islamist gunmen in Paris. Around 9,000 air strikes had been launched against the group since the start of the campaign in the summer of 2014.

Noting that IS had lost 40% of the territory it once controlled in Iraq, Mr Obama said that the terror group had not had a single successful ground operation in either Syria or Iraq since the summer. He cautioned that the US and its partners faced “a very tough fight ahead”.