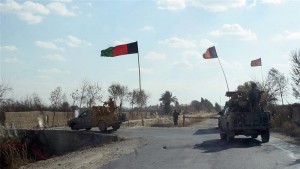 US aircraft carried out two attacks in Sangin, the district in southern Afghanistan overrun by Taliban fighters this week, officials said as the battle for the strategic province of Helmand continued. “US forces conducted two strikes in Sangin on December 23 against threats to the force,” a spokesman for the military coalition said.

Earlier on Thursday, Afghanistan’s government sent reinforcements to help besieged forces as Taliban claim to have taken control of almost all of Sangin district.

The Taliban spokesperson, Zabihullah Mujahid, said on Wednesday that their fighters had seized the entire district including police and military installations and their flags had been raised.  However, Helmand’s deputy governor, Mohammad Jan Rasoolyar, denied the claim.

“We are still fighting to push back the Taliban. Parts of Sangin are under the Taliban control but not the police and military installations,” he told Al Jazeera.  “The military planes have dropped food and supplies to the Afghan forces on ground.”