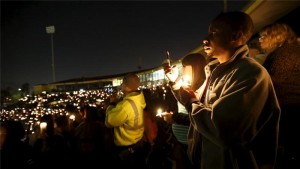 The largest Muslim advocacy group in the United States has raised concerns of a backlash following the deadly California shooting with reports of a threat of violence received at one mosque and many hate calls.  Ibrahim Hooper, spokesman for the Council on American-Islamic Relations (CAIR) in Washington DC, on Thursday condemned the killing of at least 14 people in San Bernardino, while pleading “to not generalise from the acts of individuals to an entire faith community”.

US authorities said they were still investigating the motive behind the shooting spree, allegedly carried out by the suspects Syed Farook, 28, and his wife Tashfeen Malik, 27. Reports said they were heavily armed with guns, bombs and ammunition.  Following the shooting, the New York Post – the Rupert Murdoch-owned tabloid newspaper – ran a banner headline calling the two dead suspects “MUSLIM KILLERS”. The paper later changed the headline.

“It’s completely outrageous that the New York Post would use that front-page headline,” Hooper told Al Jazeera.  He called the newspaper “irresponsible”, but added he was not surprised because “it is known for its anti-Muslim bigotry”.  “It’s inflammatory and we believe it incites hatred against all Muslims, not just against the people who allegedly carried out the San Bernardino attacks.”