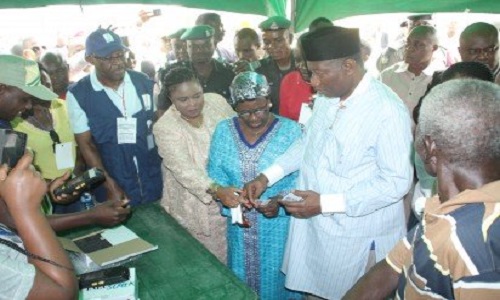 As the governorship election got underway in Bayelsa State some few hours ago, the card reader failed to recognize the fingerprint of former President Goodluck Jonathan during the accreditation process at Otazi, Playground, Polling Unit 039, Ward 13, Otuoke, Ogbia LGA.

The technical glitch brought fresh memories of what happened during the March 28 presidential poll, when the card readers failed to read Mr. Jonathan’s fingerprints.

The Independent National Electoral Commission (INEC) officials had to bring another card reader for the ex-president’s use.

While speaking to reporters on the situation, Jonathan said “I advise that before the 2019 election, the whole concept of card reader and the technology must be reviewed”.

The former president added: “I’m quite worried about the card reader issue this morning. Luckily, this is an isolated, one-state election. But from my experiences today, INEC must review this issue of PVC and card readers very well before we go into the next election”.

Mr. Jonathan recalled that: “In the last presidential elections, myself and my wife’s PVCs were rejected by the card reader. Today, because they changed mine and that of my wife’s, it was successful”.

“Five people came with me including a former commissioner known to me in the state. The card reader rejected three others. They could not have been carrying cloned cards”, the former president noted.

Mr. Jonathan, who maintained his composure throughout the ordeal, admonished Bayelsans to be calm and see politics as a duty to bring about change in the society.

He averred that a transparent and credible election are hallmarks of democracy, adding that when elections are not peaceful, they cannot be said to be credible.

According to the ex-president, the votes of the citizens must count, reiterating that “all my people from Bayelsa State should ensure that we conduct a peaceful and credible election”.

He further stated that come what might, whoever emerged governor after the voting exercise should govern the state well.