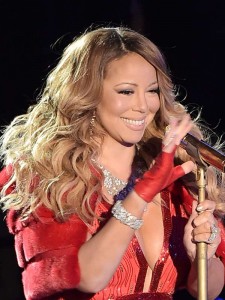 These reports emerged after a shiny diamond was noticed on her ring finger on December 30.

The glamorous 45-year-old was accompanied by her man to the Crown Casino in Melbourne, Australia on Wednesday night as she dripped in diamonds (as usual) but it was the shiniest of them rings on her left finger that has people talking.
Eyewitnesses however, tell Hollywood Life that it was probably one of her signature butterfly rings which she used as a very public way to show the world that she and Nick Cannon has split.

A close inspection of her Instagram shows a de-glammed Mariah with no jewelry on her fingers Dec. 29, and if Mariah was actually engaged, you better believe she’d be letting the entire world know!

Instead she posted a photo of herself in front of a private plane waving to the camera with a caption, “That jet-set life” while her left hand is ring-free.