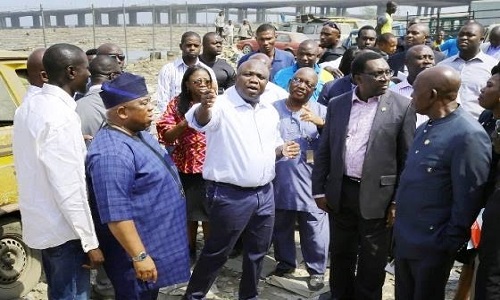 The governor made the disclosure when he unveiled plans to transform Ebute-Meta into a tourist haven.

Towards giving Alimosho a brand new look, Mr. Ambode said his government will establish a recreation park on the stretch of land overlooking the lagoon, adjacent to the Adekunle axis of the Third Mainland Bridge, which he said was an eyesore.

He also inspected the on-going projects across the state promising that many of the projects would be completed on time for the 50th year anniversary of Lagos State in May 2016.

While at Ipaja, Ambode promised to commence construction works on Ishefun-Ayetoro Road, promising residents of Alimosho that their area would soon become the new Victoria Island.

According to him, “Three months ago, you will all recall that we came to this particular road and we promised the people of Mosan-Okunola that we will deliver the Ipaja -Ayobo Road before Christmas, and it is on the strength of that promise that we are here today. Thank God, we have seen to the completion of this road; it has street lights beginning from Ipaja roundabout to the end.

“As much as we have kept our promise and delivered even before the projected day, the residents should also maintain good use of this road and cooperate with the government as we extend development to this neighbourhood. I just want to assure the people of Alimosho axis that this government is right behind you and we would do everything possible to turn Alimosho to Victoria Island”, Governor Ambode said.

While commissioning the Ejigbo road, the governor assured residents that street lights would be installed on the road from Ikotun roundabout to the Isolo Campus of Lagos Polytechnic within three months.

Other projects he inspected yesterday included the on-going construction at Brown Street Oshodi, where he was briefed by the project Manager for Lobrics Construction Company, Mr Baha.

Governor Ambode noted that the project, which commenced about six weeks ago, is now over 40 percent completed, expressing optimism that the residents in the area would enjoy the benefits of the new road when completed.

The Chairman of Oshodi-Isolo Local Government Area, Adeola Olajobi Dawood, briefed the governor on the challenges of the adjourning Igbehinadun and Inasa Streets, as the governor ordered the Public Works Corporation to rehabilitate both streets within the next seven days, charging the contractor to ensure the completion of Brown Street by the end of February 2016.

Ambode urged the residents to continue to cooperate with the contractor towards delivering the projects within the stipulated time frame.

At the Oshodi Resettlement Market, Governor Ambode ordered the Public Works Corporation to resurface the car park in the market in preparation for its reopening just as he advised the developer of the market to consider a rent-to-own modality for acquisition of the shops, stressing that a monthly payment plan would prevent the shops from being hijacked by businessmen.