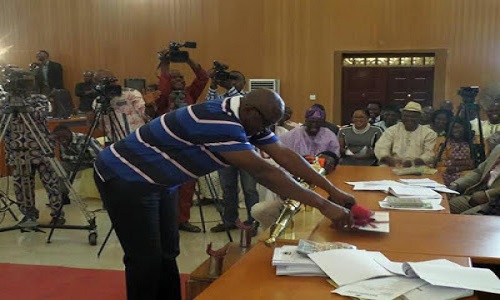 The Ekiti State House of Assembly has declared that it does not owe anybody an apology for showing absolute loyalty to the State Governor, Mr Ayodele Fayose.

The 26 member House argued that nothing would forever prevent them from standing by Ekiti people and the governor because it was through the grace of God and “his (Fayose) grace that we are here”.

The lawmakers were reacting to a statement by the Ekiti All Progressives Congress, APC, spokesman, Taiwo Olatunbosun, who criticized the governor for appearing before the House in a T-shirt and jeans on Monday, during the 2016 budget proposal presentation.

“The world watched in disbelief as Fayose stormed the House of Assembly in casual dress.

“The governor’s appearance is uncultured and in flagrant disregard of the rule of law and constituted authority. It defies decorum, violates law and order and abuses power”, the Ekiti APC spokesman said.

He further said the lawmakers’ confirmed their subservient relationship with Mr. Fayose by allowing him address them in casual wear and brandishing the gavel.

Speaking with journalists in Ado Ekiti, the state capital at the weekend, the House Committee Chairman on Information, Gboyega Aribisogan, advised the APC “to face issues, especially the government of inconclusiveness being run in Abuja instead of having sleepless nights over how the governor chooses to dress”.

According to Aribisogan, the APC should know that the assembly was not one that would collaborate with the executive to run the state aground as done under the immediate past Kayode Fayemi-led APC government.

He said “Instead of them (APC) to face issues, especially concerning their party that is almost going into extinction in Ekiti and the cluelessness going on in Abuja, they have turned themselves into Governor Fayose’s advisers on mode of dressing and public presentation.

“Is it our fault that the APC does not have a single member in the House of Assembly? And what has what Governor Fayose wears got to do with governance? What did Ekiti people gain from the four years ‘agbada wearing’ government of APC apart from monumental debt that will take the state up till year 2036 to pay?

“The reality that those in APC must face is that if they are waiting for us to confront Governor Fayose on issues of governance, they will wait till eternity”.