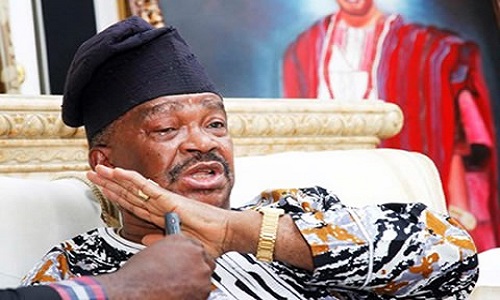 The former number two citizen during the military dictatorship of Gen. Abacha, stated this at the weekend during the General Oladipo Diya Public Speaking Competition for Schools in Ogun State.

The retired army general explained that he considered himself too old to play active politics, hence his decision to play the role of an elder statesman.

“Everybody is a politician”, he said. “It is either you are quiet and you are not a participant in politics. But there is no human being that is completely out of politics. All you do is that you remain at the background, you sit and watch and that’s all”.

“Now, I’m a grown up person. I prefer to remain in backseat and watch events from the side line. When it needs correction or need for you to voice out completely, you say it”, Mr. Diya, who was arrested for treason in 1997, added.

Diya also said he had forgiven his former boss in reference to the death sentence passed on him by a military court for allegedly leading the alleged coup to topple Abacha.

It would be recalled that the Ogun State-born army general was awaiting death, when Abacha died in mysterious circumstances in June 1998.

“First and foremost we have to realize that we are either Christians or Muslims. What is important now is today and the future.

“Today, I’m grateful to God because I retired as Lieutenant General, how many people can rise to the position of Lt General, to the rank of being a former Vice President, or being the former successful governor. I give glory to God and I will continue to thank my creator”, he said.

On his assessment of President Muhammadu Buhari’s administration, Mr. Diya said the present federal government should be allowed time to implement its policies.

“Everybody should be patient, this government is new, not even up to a year and they are using four years. So let us be patient and anything we have to say, let us find a way to say it quietly and responsibly. That is the purpose of governance”, he said.

Speaking on his educational programme in Ogun, Mr. Diya who was a military governor of the state, explained that “if there is anything, we can now contribute to the progress of education in Ogun State. Let us do whatever we can do to improve the standard of education.

“We just believe that public speaking is an important aspect of education especially in Ogun State and Nigeria generally”.

“When I was there, the standard even at that time needed improvement and we all acknowledged it. Even now, the standard needs improvement. If you ask anybody now, those who finish secondary that have credit in English or Mathematics you will count them by your fingers, so that is the basis of education”.

“If somebody finishes secondary school and his English is poor and his Mathematics is also poor, right from the word ‘go’, where they can go is already limited; because without Mathematics and English, you are limited and it’s not good enough”, Gen. Diya (retd) added.

When asked to comment on the ongoing arms deal scandal where money meant for the purchase of arms was allegedly diverted, the former chief of the general staff said those who have the details are already doing something about it.