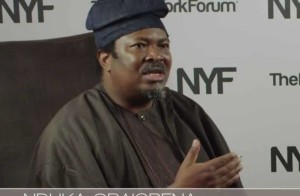 Publisher of ThisDay Newspapers and President, Newspapers Proprietors Association of Nigeria (NPAN), Nduka Obaigbena has made clarifications over the purpose of the N550 million and N120 million payments he received from the office of the former National Security Adviser, Sambo Dasuki.

Mr. Obaigbena made the clarifications in response to an invitation by the Economic and Financial Commission (EFCC) in connection to the ongoing probe into the disbursement of $2.1 billion arms procurement fund by the office of the former NSA.

The ThisDay publisher, who also owns Arise News, a US-based world news channel, denied ever receiving any suspicious funds from the office of the former NSA, explaining that all funds he received were “payment for compensation to mitigate” terror attacks on the head office of his newspaper in Abuja and another attack on the newspaper’s office in Kaduna in 2012.

He estimated the damage done to his business by the Boko Haram attacks to be worth over N2.5 billion.

In a letter, dated December 9, 2015, addressed to the Chairman of the EFCC, Mr Obaigbena explained that he was in the United States and would honour the invitation in person as soon as he returned to the country.

He, however, stated that he thought it necessary to make the clarification prior to his return to Nigeria.

“N100,000,000 +N100,000,000 and N250,000,000 respectively received in August, November and February 2014 as compensation to mitigate the dastardly Boko Haram twin bombing of the Thisday newspapers offices in Abuja and Kaduna on Thursday April 26, 2012, during which four innocent Nigerian lives were lost, our building destroyed and we lost full colour Goss printing towers and three (3) pre-press Computer-To-Plate and auxiliary equipment and other (in)valuable property valued at over N2.5 billion having lost our printing facility to terrorists due to inadequate protection by the Federal Government of Nigeria”, he wrote.

Justifying his request for compensation, Mr Obaigbena said that the federal government spent N3 billion in reconstructing the United Nations office that was bombed by Boko Haram in August 2011 with more earmarked for furnishing.

He further wrote that he received additional N120 million in March 2015 on behalf of the NPAN, of which he is its president and 12 newspapers, who demanded compensation for the “unlawful seizure and stoppage of circulation by armed soldiers in Abuja and several cities”.

Mr. Obaigbena explained that as president of the NPAN, he led media leaders to hold discussions with the Goodluck Jonathan administration to avert a planned class action the newspapers were going to institute against the Armed Forces and Nigerian government.

He further explained that on both occasions, former President Jonathan initially refused to accede to the demands so as not to create a precedence but later approved the payment after he (Nduka) confronted him with the effort the government had undertaken to reconstruct the UN building.

“On both occasions, President Jonathaan said he did not wish to lay precedence and in our case, he specifically said there were many victims of Boko Haram, I had to confront President Jonathan on the Issue when I learnt of the approval for the reconstruction of the Abuja United Nations Building, since we were the second major organisation that would be attacked by Boko Haram after the UN attack. He therefore directed me to meet with the National Security Adviser who processed the three payments in question”.