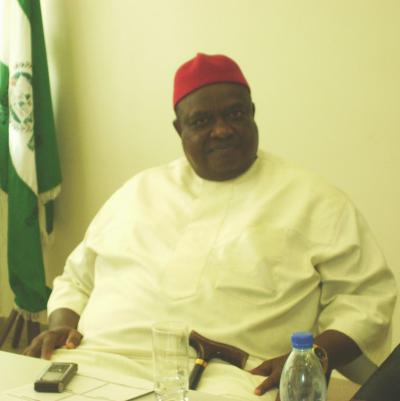 A Peoples Democratic Party, PDP, chieftain and publisher of Champion newspaper, Chief Emmanuel Iwuanyanwu, has expressed serious reservations at the way he said some people have been going about their demand for sovereign state of Biafra.

The billionaire-businessman and philanthropist, who voiced his opinions yesterday in a chat with reporters in Owerri, the Imo State capital, also decried how some people have gone out of their way to publish what they call accounts of the Nigerian civil war.

“Other tribes are doing better than us. It is good for somebody to protest but it is nonsensical for people to go to the extreme level of taking laws into his hands by blocking roads.

“Books have been written by people who neither commanded any command nor fought the battle”, Iwuanyanwu fumed.

According to the PDP chieftain, he gets visibly angry when people claim that Ndigbo lost the war, pointing out that if there was any failure, it was by Ndigbo.

“To say that Igbos are marginalized is stating the obvious and government must try and address the anomaly. It must also be said that before the war, things were done purely on merit but it is no longer so today.

“Where the Igbos go from here is anybody’s guess”, Chief Iwuanyanwu said.

While giving kudos to the then military head of state, General Yakubu Gowon for commencing the ‘3Rs’ – reconstruction, rehabilitation and reconciliation very well, Iwuanyanwu expressed displeasure at the way Ndigbo now rush to Abuja for all sorts of reasons.

“People now flood Abuja for several reasons instead of coming home to develop our place.

“I was excited when Imo State Government started preaching the palm revolution but what has happened so far, does not give anybody cause for cheers. We have fertile land in the East but we sadly import all the foods we eat”, Chief Iwuanyanwu said.

Speaking about the proposed 2017 population census, the newspaper publisher said that Igbos will always be in minority, especially as in some cultures and religious belief, people are expected to marry more than one wife and the ability to have more than 80 children.

“If the nation refuses to use the large population emanating from the numerous wives some people marry, then we can support the call for the non-politicization of census and the consequent figures”, Iwuanyanwu said.