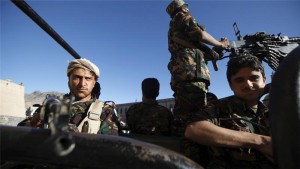 A ceasefire has taken effect in Yemen after more than a year of fighting between government forces and Houthi rebels in which thousands of people were killed. Fighting raged on Tuesday shortly before the 09:00 GMT start of the ceasefire, which was called by the Saudi-led coalition battling the Iran-backed rebels.

The coalition, which launched an air campaign against the Shia Houthi rebels in March, said the ceasefire would go ahead at the request of Yemeni President Abd-Rabbu Mansour Hadi. But it warned that it “reserves the right to respond in case of any violation”.

Hadi has declared his government’s intention to have the seven-day truce to coincide with talks opening in Switzerland and to be “renewed automatically if the other party commits to it,” the coalition statement said. A Yemen presidential statement said the proposed ceasefire “comes out of keenness to grab any chance to achieve peace, to reduce the suffering of our people in Yemen and to end bloodshed.”