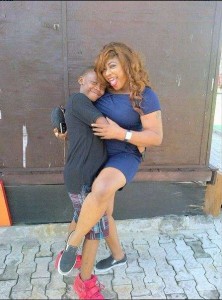 Nollywood Yoruba actress, Ayo Adesanya flaunted the only man in her life on social media yesterday.

The 46 year old actress revealed her Man Crush Monday and it was none other than her 11 year old son.

Advertisement
“Always thank God for everything…for the mighty stuffs and the tinny things…a moment can mean the world to u…don’t take any for granted…thanking God for a wonderful moment like this…means everything to me.. #joyuneding. #mymancrush #babyboooooflife #myerrythang” wrote the actress.

Ayo Adesanya’s son is a product of her marriage with estranged husband Omogoriola Hassan.

In August Ayo Adesanya celebrated her 46 year old birthday and also revealed In July that she is still open to the idea of marriage.

“Tomorrow, I might just meet somebody that would sweep me off my feet, so it’s not as if I’m closing the door totally. God is the owner of my life, so if he says okay, this is what he wants” she said during an interview.