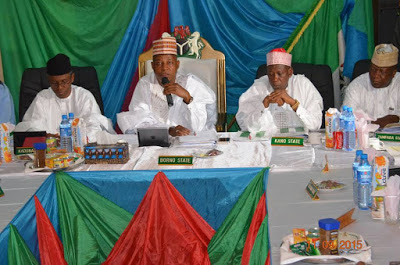 The governors of 19 northern states have called on the federal government to exercise caution in its handling of the Shi’ite crisis sparked by the recent clash in Zaria, Kaduna State between members of the Islamic Movement in Nigeria and the convoy of the Chief of Army Staff, Lt-General Tukur Buratai.

The confrontation led to the killing of no fewer than 10 members of the Shi’ite sect by soldiers, who said they acted to protect the COAS from an assassination attempt.

The killings have provoked outrage across the country and even beyond, with the Iranian, British and U.S Governments calling for a credible and independent probe of the incident.

The governors, who spoke under the umbrella of Northern States’ Governors Forum at a meeting yesterday in Kaduna to review the situation, warned that the crisis was not in Nigeria’s best interest and a repeat must not be allowed.

The governors recalled that a similar incidence gave rise to the Boko Haram insurgency.

Chairman of the Forum and Governor of Borno State, Kashim Shettima, said pointedly that “we don’t want the same mistake that happened over the Boko Haram crisis to repeat itself”.

He said: “the issue has to do with an Islamic group that has membership across the 19 States in the North and beyond. We want to look how to ensure that the incident does not provide room for anyone or group to perpetuate violence in any of the 19 northern states.

“We already have the serious problems of Boko Haram to contend with. We are not in any way comparing the Islamic Movement with Boko Haram, no. But we don’t want the same mistake that happened over the Boko Haram crisis to repeat itself.

“When Boko Haram went wild in July 2009 with clashes between them and the police in Bauchi on 25th and 26th in Maiduguri, most Nigerians saw the issues as the problems of Bauchi and Borno. When they continued to attack Borno and Yobe, it became the affairs of Borno and Yobe States. All of a sudden, there was suicide attack in Abuja in 2012 and then everything went out of control and we are where we are today.

“So, like I said, we do not make any comparison between the murderously violent Boko Haram insurgents and the Islamic Movement but we are here to analyze and ensure that we take measures that will close any avenue which some people may want to seize to create violence in the immediate or long run”.

The Northern Governors said that while they had no doubt about the capability and competence of Kaduna State Governor, Malam Nasir El-Rufai to take necessary measures to address the incident, their intervention in the matter stemmed from the relevance accorded to Kaduna as the socio-political headquarters of the North.

“We are very confident in the Governor of Kaduna State, Malam Nasiru El-Rufai. His competence and character have never come under any doubt.

“Soon after the Zaria crisis, the Governor was at the scene and he spoke with leader of the Islamic Movement and met the Chief of Army Staff. He addressed the people of Kaduna State on December 17, 2015 and the Government took some firm far reaching measures it considers necessary.

“Malam El-Rufai is the man on ground, he knows the subject matter more than us and he knows the steps he deems most suitable after his extensive consultations. So, we are not here to do his job.

“Moreover, Kaduna is the socio-political heart of northern Nigeria. Kaduna is to us, what Lagos is to the South West. What affects Kaduna State invariably affects the whole north. If you notice, we make it a duty to travel to Kaduna to hold our meeting instead of holding it in Abuja. Kaduna is the headquarters of the northern Nigeria but it will have that significance if we accord it the relevance it deserves. We have a duty to preserve history and our values by coming here.

“While here, we will be briefed on the Zaria incident and we will compare thoughts analytically and extensively. We will also be looking any other matter that affects the well-being of the north and we shall brief the media on issues that we don’t consider too security sensitive to make public”.