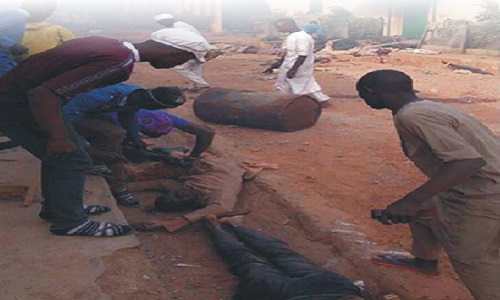 Following the clash between Shi’ite Muslims and soldiers in Zaria, Kaduna State penultimate Saturday, a member of the Islamic Movement in Nigeria has decried the shameful and inhuman conduct of some youth, who went about dispossessing dead members of the movement of the their personal effects.

The clash between the soldiers and members of the movement resulted in a yet-to-be ascertained number of casualties, with unconfirmed reports putting the number of dead at over 300.

While the military explained that its decision to use lethal force was meant to defend the Chief of Army Staff, Lt.-Gen. Tukuru Buratai, who it said was the target of what it described as an assassination attempt, the Shi’ite group, on its part, saw the army’s action as premeditated genocide attack on them.

It was reported that about 10 Shi’ite members were gunned down by soldiers that Saturday afternoon when they refused to clear the road despite pleas, for the Chief of Army Staff’s convoy to pass through.

A member of the movement, Abdulmumin Giwa, who spoke with The Nation, said that residents of Zaria, who stole from the dead Shi’ite members, committed a worse act than the soldiers who killed their brothers.

He said: “We are consoled by the fact that our brothers who were killed by soldiers died as martyrs, and by Allah’s grace, paradise is their abode. But, residents of Zaria, particularly those around the area displayed lack of fear of God.

“While our brothers were lying in the pool of their own blood, some youths resident in the area went there not on a mission to rescue the injured but to rob the dead. This is not something hidden. The video of how people robbed our dead colleagues has gone viral on the social media, particularly Facebook. This shows that there is no sympathy for the dead any longer.

“Mind you, these are the people who live around the scene of the attack. They heard everything that transpired between our brothers and the soldiers. This is not even someone who died of a natural cause. They were killed by soldiers and some people did not even feel sorry for them. Instead, they were robbing them.

“In fact, they were fighting themselves over the money, mobile phones and other valuables stolen from corpses of their fellow Muslim brothers and sisters. This is even worse than the action of the soldiers who killed them. It is an indication that if those people had guns too, they won’t mind killing people to take their property”.