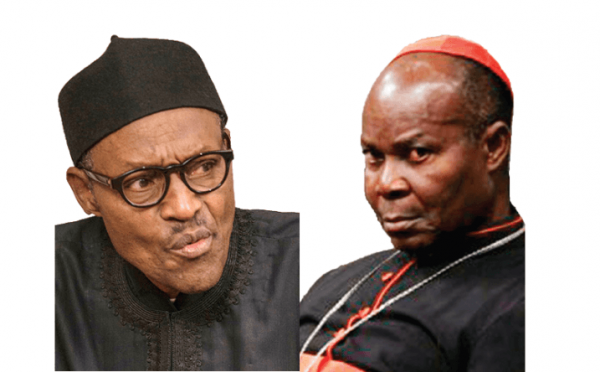 The Archbishop Emeritus of the Catholic Archdiocese of Lagos, Cardinal Anthony Olubunmi Okogies, has lashed out at President Muhammadu Buhari and said that the APC’s change mantra is causing misery and not the much needed succour. Here are the reasons he put forward…

1. Okogie accused the president of waging a shoddy corruption war and acting disdainfully towards the judicial authorities while millions of Nigerians were left to face unimaginable social problems.

2. Okogie also cited a snail paced and disordered methodology in governance as one of his reasons.

4. He also pointed out the rudderless and confused Central Bank with an unclear monetary policy strategy as one of his reasons.

5. He noted that a lot of Nigerians are beginning to feel that Buhari is fast transforming this nation into a police state where Mr. President, the EFCC and DSS rule the day.

6. He also frowned at the President’s refusal to heed court pronouncements regarding the bail granted to the Director of Radio Biafra, Nnamdi Kanu and former National Security Adviser, Col. Sambo Dasuki.

7. He said Governors, who arm-twisted Okonjo Iweala into signing out our reserves held by Central Bank, are today ministers in the APC government and we are still talking about change and corruption when old things refuse to pass away.

8. Existing industries are almost dead and call for urgent revitalization.

9. The budget ought to aid solutions to the mass unemployment, Rural-Urban migration, skewedness in the distribution of income, abject rural poverty and industrialization of rural economy.

10 .He said Buhari preferred the use of counter trade and inward looking policies like cutting down cost and flamboyant exotic life styles before his emergence but he is not so sure we have the same Buhari again.

Do you agree with him?