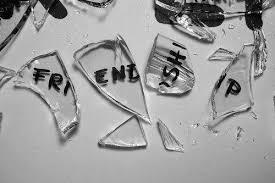 They’re not adding any value to your life.

When it comes to friends, there’s bound to be a few bad apples in the bunch. For whatever reason — maybe they’re overly critical, perpetually depressed or just plain annoying — you can’t stand to be around them. Yet rather than keeping them in your life, consider giving them the heave-ho or you could suffer.

“Keeping toxic people around could take away time and energy from positive friends, damage your self-esteem or put you in harm’s way,” says Jan Yager, Ph.D., sociologist and author of When Friendship Hurts. Here, she deconstructs a dozen so-called friends you may want to break up with.

You know these people: They’re always critical of everything you do and say, which can be contagious. If this friend has redeeming traits, ignore the overly critical comments or make a joke by saying something like, “Let’s see if you can last an hour without saying anything negative.” However, if you’re unable to distance yourself or your self-esteem is hurting too much, step away from the relationship.

Too much advice is never good, especially from a supposed friend. If you’re keeping this person around because of the other wonderful traits she possesses, tell your friend you don’t want advice unless you ask. Or thank the person without discussing her comments. Another solution? Start analyzing her and she may realize how annoying that can be.

Everyone is self-absorbed to some extent, but when a person is always focused on herself and never lets you share anything about yourself, something needs to give. Because she may not be aware she’s doing this, let your friend know. If she can’t curb this trait and you don’t want the friendship to end, limit how long you let her go on about herself; then give yourself equal air time.

Imitation is the highest form of flattery, but it could create hostility between you and your friend. If you want to keep her around, protect yourself by keeping things to yourself more often or timing when you share information. If, though, this trait is too annoying, end the friendship.

You’re tired of constantly being disappointed by this friend, so if you want to keep this person around, lower your expectations. Also, call your friend on this behavior. Clue her in by asking, “Did you know this is the fourth time in two months you had to cancel lunch at the last minute?” However, if this trait puts you in too many compromising situations, makes you feel frustrated or disappointed in yourself for being treated like this, it may be time to abandon ship.

From shoplifting and experimenting with drugs to driving recklessly, your daredevil friend’s behavior should raise serious red flags. “You need to protect yourself,” Yager says, adding that you want to encourage your friend to stop her risk-taking ways. But don’t try to change her yourself; more than likely, your friend will need help from a professional therapist. Then tell your friend you’re suspending your relationship until she straightens up.

Some competition can be healthy — if your friend’s goals or achievements serve as motivation for you — but if the Competitor wants what you have, acts in a hostile way and will do anything not only to get what you have but take it away, this could cost you. If your friend has to get a house that’s bigger or more expensive than yours to seem more successful than you, it may be time to dump her.

This friend is overly dependent on you for emotional support or information. True, it can be flattering to be needed, and of course, the Bloodsucker may be there for you when other friends are too busy for you. But this energy vampire can be draining, which is why you should consider if this friend is worth keeping. As long as you set limits and know that this person will probably make extreme demands on you, you could keep this person in your life.

Don’t tolerate anybody who verbally, physically or sexually abuses you. Of course, in some situations, it can be tough to figure out what constitutes abuse. Keep in mind, if someone is vicious and malicious in their comments and treatment of you, you’re being verbally abused.

Even sexual abuse may not be obvious, as it include subtle behaviors like making jokes that are offensive or sexual in nature, inappropriate comments or sexual harassment. If necessary, contact local police, counseling centers, victims programs, addiction programs or emergency hotlines for help. Then keep this kind of person away from you.

From spreading lies about you to going after your romantic partner, the Double-Crosser’s actions are the exact opposite of a friend’s. If the double-cross happened only once, you might decide to continue the friendship, but let this guy know that his behavior is unacceptable. If you can’t forgive, cut the friendship. Just don’t ignite his wrath or he could turn against you.

Being a Controller is part of this person’s personality, which means it’s a harder trait to break. But it can be frustrating for you to be dominated so much. Maybe the Controller has to pick out everything you do as friends and gives an opinion on everything you do or want to do without being asked.

There is no give and take, as the Controller is uncomfortable and bossy if you want to make a choice about something. If you want to keep the friendship alive, let the person know how much you dislike being controlled. This trait, though, may become so negative that you may need to break ties.

“The Downer is a person you have to let into your life with care because this trait can be contagious,” Yager says. It goes without saying, of course, that these types are always down, but ironically, if you’re upbeat and positive, that may be the reason the Downer was attracted to you in the first place.

It is not your job to be a therapist. But realize that she may not be able to change without professional help. Decide if she has any redeeming traits and if you can stay upbeat around her. If not, end the friendship. Don’t keep her around just because you feel sorry for her.