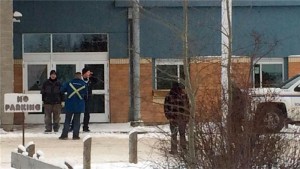 Four people were killed and at least two wounded when a gunman opened fire at a high school and a second location in the Canadian province of Saskatchewan, officials said. A male suspect was in custody but officials have not yet given a motivation for Friday’s shooting in La Loche, an aboriginal community 600km north of the city of Saskatoon.

Initial reports said five people were killed. Royal Canadian Mounted Police Chief Supt. Maureen Levy said authorities had seized the suspect’s gun. “There is four individuals deceased as a result of this tragedy and there are other injuries and they’re being treated by health care professionals at this time,” she told reporters.

“I can tell you that we have one male in custody. Public safety is no longer at risk and we have secured the firearm.”

Canadian Prime Minister Justin Trudeau, speaking from the annual World Economic Forum in Davos, Switzerland, said what had happened was “every parent’s worst nightmare”. He added: “The community is reeling.” A student at the high school was just returning from lunch when shots were fired said his friends ran past him urging him to get out.