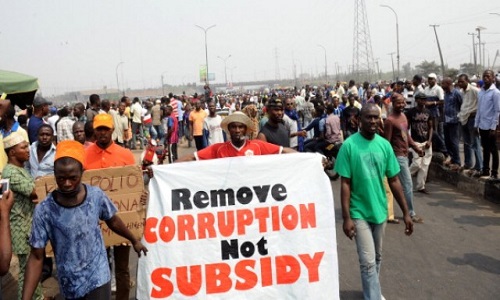 Transportation Minister, Hon. Chibuike Rotimi Amaechi, yesterday, confirmed the removal of subsidy on petrol, pointing out that it was not included in the 2016 budget.

Speaking on a panel at the Business Eye Roundtable discussion in Lagos, Amaechi noted that this was part of the policies and steps taken by the federal government to save the economy.

“We are not saying oil subsidy has been removed, but check it in the budget; it is not there so where would he pay from? And if you know the president very well he would not spend anything outside the budget,” Amaechi said.

“I am one of the vocal ministers who can say it has been removed but I am just saying it is not in the budget.”

The former Rivers State governor said this in reaction to a statement by the Chief Executive Officer, RTC Advisory Services Limited, Mr. Opeyemi Agbaje who urged the federal government to put in the right polices which would tackle the economic deficits in the country.

“My fear is that in government itself, there is insufficient realism around the real problem. I don’t think polices are right. They are not dealing with the reality of problem,” Agbaje had said, adding, “I think the mind-set has not fully accepted the ramifications of the economic dimensions of the problem. The federal government needs to be bold, tell Nigerians the truth, face the issues around how we can get investments into this economy, and subsidies and spending.”