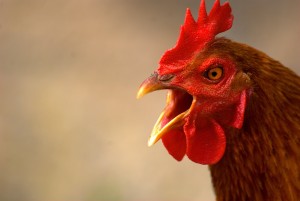 A fowl on Friday around Konwea Plaza in Asaba, Delta State allegedly pecked a buyer to coma, leaving the crowd who had thronged the scene to catch a glimpse of the incident to scamper for safety. It was gathered that a big broiler on sale with others by the plaza, pecked the buyer identified as Sunday Ibie on his eyes.

The customer, who had wanted to buy the chicken, immediately fell to the ground breathing heavily before he was rushed to the Federal Medical Centre, Asaba. The seller identified as Mama Ekene told our correspondent that the buyer had approached her to buy the broiler and was given the price of N4,000 but haggled for N3,000.

She said: “I am shocked by the incident I was surprised that it pecked man in his right eye as he attempted to tie it. He fell down immediately and I had to raise the alarm for help.”  An eyewitness, Kate Okafor, also said the broiler attacked the buyer when he attempted to tie its legs before taking it away.

The Police Public Relations Officer in the state, Mrs. Celestina Kalu, who confirmed the incident to our correspondent, said: “What baffled everybody was the way and manner the broiler attacked the victim.’’ She added that the seller had been arresting by police and is helping with further investigations. The spokesperson stated, “The victim is receiving treatment at the FMC Asaba and he is still in coma. The bird removed part of the flesh in the buyer’s eye and inflicted a deep cut in that part.’’