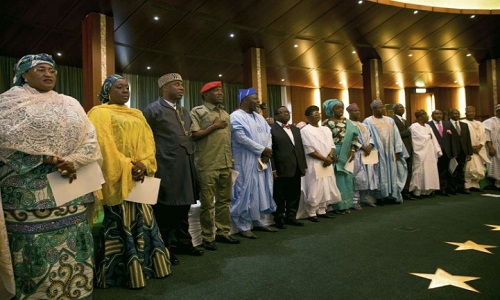 One of Nigeria’s leading anti-corruption coalitions, the Civil Society Network Against Corruption (CSNAC), has challenged all the 36 ministers in President Muhammadu Buhari’s cabinet, to publicly declare their assets in light of the ongoing war against corruption

In a statement Sunday, the coalition said through its chairman, Olanrewaju Suraju, that by publicly declaring their assets, the ministers would have demonstrated their commitment to complement the president’s zero tolerance for corruption and promise of  a transparent government.

According to CSNAC, President Buhari and his vice, Yemi Osinbajo, “have laid a good precedence by keeping in line with Section 140 of the Federal Republic of Nigeria 1999 (as amended), by declaring their assets publicly.

“This was also in fulfilment of their campaign promise of running a transparent government as well as eradicating corruption in the country.

“Public declaration of assets usually aids the assessment of public officers and will help in monitoring of public office holders and ultimately reveal those who corruptly enriched themselves while in office, paving way for proper punishment and sanctions against them.

“As public officers it is expected that the ministers should also declare their assets in line with this administration’s quest to run a transparent and corrupt free government. With the President and his Vice having shown a great example by declaring their assets, the ministers should also follow suit without further delay. The President, in his ‘my covenant with Nigerians’, promised to ‘encourage’ his ministers to publicly declare their assets. The President is hereby reminded of his promise and called to act appropriately.

“CSNAC therefore calls on all ministers to publicly declare their assets as a matter of priority. By so doing, they will have shown their readiness to complement the President’s zero tolerance for corruption and promise in the actualisation of a transparent and corrupt free Nigeria”.