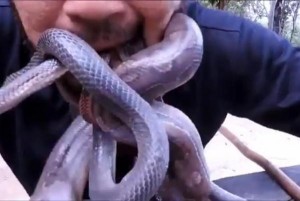 A man known as the “Snake Ninja” in Brazil placed the heads of four live snakes in his mouth for several seconds to protest deforestation.

Arteval Duarte, who dubbed himself the “Snake Ninja,” filmed a stunt last week in Goianesia do Para where he gathered the four snakes — a chicken snake, a coral snake, a clelia snake and an epicrates assisi — in a clump with their heads at the top.

Duarte places the snakes’ heads in his mouth and holds them there for several seconds, before releasing them unharmed.

Duarte, an anti-deforestation activist, has previously performed attention-grabbing stunts including wrapping a venomous snake around a poison toad and holding both creatures in his mouth.