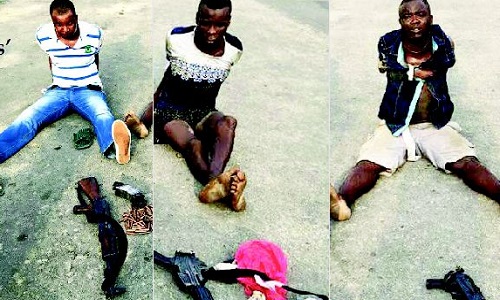 The All Progressives Congress, APC, in Rivers State has faulted Governor Nyesom Wike’s decision to drop charges against three “notorious armed robbers”, who allegedly killed policemen and soldiers across the state.

The Rivers APC chairman, Dr. Davies Ikanya, in a statement in Port Harcourt, the state capital yesterday, expressed displeasure with the governor’s decision.

The statement said: “On November 19, 2015, three members of a notorious armed robbery gang, operating in Port Harcourt metropolis with formidable weaponry, headed by George, a native of Rumukunde in Emohua Local Government of Rivers State, were arrested by men of the Special Anti-Robbery Squad (SARS) of the Rivers State Police Command.

Police investigations revealed that the three suspects stole the arms from the slain policemen and soldiers, including Lance Corporal Yohanna Kamuji and Corporal Bello Lazarus, both attached to 20 Battalion of the Nigerian Army at Bori Camp in Port Harcourt, The Nation reports.

The gang, it was learnt, was allegedly responsible for a robbery attack on a Diamond Bank branch in Port Harcourt last year October.

The statement added: “The APC is shocked that right from the day the suspects were arrested and two of them were charged to court, there had been intense pressure by officials of the Rivers State government to have them released, as the suspects are alleged to be the boys of a serving Government House worker.

“With Wike’s government on its way out, the Attorney-General, through the Director of Public Prosecution (DPP), advised against further prosecution of the suspects, who were allegedly responsible for the killing of many innocent citizens, including policemen and soldiers.

“This is contained in a legal advice by the DPP, advising that the charges against the three gang members be dropped; their case files have been returned to the police”.