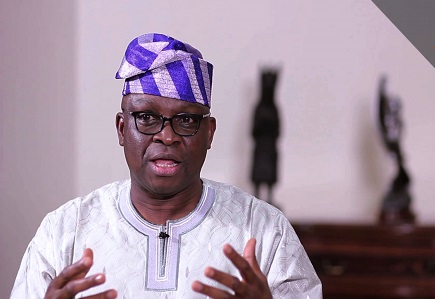 The Peoples Democratic Party, PDP, in Ekiti State has accused the leadership of the state chapter of All Progressives Congress and at the national level of plotting to render the state violence-prone from now, as part of its calculated attempts towards taking over the state in 2018.

The Ekiti PDP publicity secretary, Jackson Adebayo, made the allegation in a statement made available to journalists in Ado Ekiti, the state capital on Wednesday.

According to Adebayo, the recourse to violence was adopted by the APC after some persons purportedly commissioned by its leaders to assess the party’s chances of returning to power was rated ‘too low’.

Giving a narrative of how and where the decision was reached, the Ekiti PDP spokesman alleged that the national leaders of the APC and some members of the party from Ekiti State met for more than six hours in an hotel along Badagry Road in Lagos on Monday where some of the leaders blamed the immediate past Governor of the state and current Minister of Solid Minerals, Dr. Kayode Fayemi, for the downturn in the fortunes of the party in the state.

He further said although some members of the party who were invited from Ekiti State were given the opportunity to present their own assessment, which was considered with reservations, the leaders felt the state should not be left alone for them because of what an insider described as the naivety of those who lead the party in the state.

Adebayo also alleged that at the meeting, one of the Special Advisers to President Muhammadu Buhari was mandated to coordinate the spate of violence that would be unleashed on the state as from January on intermittent basis.

He said in the statement: “We want to alert the people of Ekiti State that the APC leaders have appointed one of the Special Advisers to President Muhammadu Buhari to coordinate the crisis which the party has planned for Ekiti State in their preparation to draw the sympathy of the people of the state all in the name of politics”.

The PDP also claimed that the outcome of the meeting was responsible for the recent boast of members of the APC in the state that Governor Ayo Fayose’s days were numbered in the Government House, with their proposed series of protests to call for the adoption of the Kaduna Army panel report as an electoral indictment on the PDP government in the state.

Adebayo added in the statement: “We want to say categorically that the APC leaders are planning serious violence in Ekiti this year with the revelations from their Lagos meeting but this will be vehemently resisted by the people of the state who gave their mandate to the present PDP government in the state”.

He, however, warned that the PDP as a party, would not stand and watch while some disgruntled “political misfits inflict terror on the state and the government struggling to cater for the citizens in the face of economic hardship that the Buhari-led administration has led the nation into”.

The PDP equally called on the Inspector General of Police and other security agencies to look into its claim and beam their searchlight on the leadership of the APC so that the unwarranted violence they are planning on Ekiti State would not come to fruition.