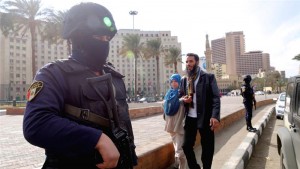 Anti-government protesters defied a security crackdown and took to the streets as Egypt marked the fifth anniversary on Monday of the 2011 uprising that toppled long-time ruler Hosni Mubarak.

Egyptians demonstrated late Sunday against the military-led government in Alexandria’s Al-Qaed Ibrahim Square, which was a major site of 2011 protests, as well as in Nasr City and Shobra district in the capital, Cairo.

Residents reported the build-up of security forces which, along with recent crackdowns on activists and arbitrary raids into homes, reflected the government’s resolve to prevent marking the anniversary with popular demonstrations similar to those in 2011.

In a televised speech on Sunday, Egypt’s leader Abdel Fattah el-Sisi argued his government was continuing the aspirations of the 2011 uprising, in spite of the documented human rights violations under his rule, as well as the worsening economy.