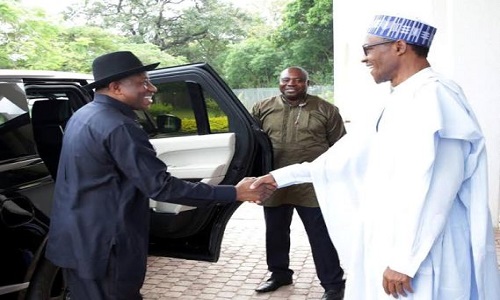 The Committee for the Defence of Democracy (CDD) has asked the APC government of President Muhammadu Buhari to leave former President Goodluck Jonathan out of the frivolous allegations surrounding the purported 2.1 million dollars arms deal. The CDD told Buhari to stop blaming his predecessor Jonathan for Nigeria’s problems, and urged the government to focus on delivering dividends of democracy to Nigerians instead. The CDD made their point, so in light of the issues they raised INFORMATION NIGERIA he 4 reasons they stated as to why Buhari should leave Jonathan out…

Success in fighting terror – They said regardless of difficulty the Jonathan administration faced in procuring arms from some western nations over alleged human rights issues, it still managed to source sizable quantities of platforms, weapons, bullets and other ammunition for the Nigerian Army, Navy and Air Force, which were used to tackle insurgency to a near end before the end of his administration.

At purchase or arms for the military, Jonathan’s administration did better than Buhari’s – They insisted that Buhari’s government has not bought any new arms since it came into power till date.

Chasing after Jonathan is a distraction Buhari can’t afford – They said that the economy is sliding towards a recession and there are several uncertainties trailing the country, Buhari should therefore face the business of governance and stop the blame game.