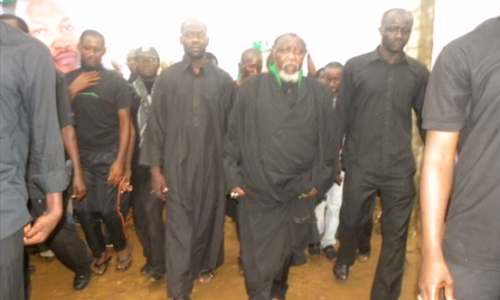 Concluding part of Army vs Shi’ites: When Lawlessness Becomes The New Law By Ayodele Daniel (1)

Why was this so? Back then, like about 20 years ago or there about, whenever crisis was to break out in Zaria, it was always after the prayers and if memory serves me right, most of these crises that always started as a spillover from the Mosques, was due to the activities of the leader of the Shi’ite sect in Nigeria, El-Zakzaky.

Back then, I didn’t know what they were called. I just knew El-Zakzaky meant ‘terror’. So notorious was he and his followers or maybe the other Muslim adherents weren’t so tolerant, I wouldn’t know, he was banned from coming to observe the Juma’at prayers at the A.B.U Main Campus Mosque just after Main Gate to your right. I think the ban is still in force till this day.

Again, I’ll stress that I have never witnessed the Sheik, who by the way is rumored to be a First Class graduate of Economics from A.B.U Zaria (if true, those who passed through this institution know how easy it is for a Camel to pass through the eye of a needle than for a student to graduate with First Class, more so, from Econs Dept.) or any of his followers, engaged in acts of violence, but I have lived for many years, under the psychological trauma that he and his multitudes of followers are a keg of gunpowder waiting to explode!

How else do you describe a sect that dresses in all black from head to toe, takes over a portion of a highway unchallenged and under the cover of police and military protection, seem to be above the law (members of the sect, especially the youth, can be seen in broad daylight in front the Husaniyya, brazenly brandishing various dangerous weapons) and carving what looks like their own territory within a territory.

Whenever they held their procession, the hardships they subject citizens to, including myself, cannot be quantified.

Therefore, it seemed like a relief that their attempt last December to subject Zaria residents to another round of hardships by blocking the highway and purportedly preventing the convoy of the Chief of Army Staff, Lt.-Gen. Tukur Buratai, was rebuffed, albeit, with attendant avoidable loss of human lives.

I have seen videos from the one telling the side of the Nigerian Army and that telling the side of the Shi’ites, and I came to the conclusion that why block the highway and prevent a Chief of Army Staff from passing through despite repeated pleas? Also, did the convoy of the army chief take that particular route with a pre-meditated plan knowing fully well the road was blocked and there was an alternative route to take? Because if Gen. Buratai passed that road on that unfortunate day without prior information that it was barricaded, then it goes to expose the level of intelligence gathering among our security forces.

The video telling the side of the army, also exposed, though unconsciously, the lack of respect for human life and level of tolerance for ‘bloody civilians’ by the lower cadre of Nigerian soldiers, especially.

That the Army spokesman, Col. Sani Usman, had to repeatedly warn the soldiers behind him as he proceeded to plead with the Shi’ite youths to open up the road “don’t shoot! Hold fire! I repeat, hold fire!” goes on to show that even he, was aware that the boys could release a hail of bullets and in the process, he too could be felled.

That the Islamic Movement in Nigeria, in its own footage, attempted to disown the youths clearly seen in the video as brandishing swords, clubs and daggers, is a futile effort as those youths were part and parcel of them. There was no need denying the obvious!

Also, why would the youths remain adamant and refuse to heed a simple, yet repeated plea to clear up the road for the army chief’s convoy to pass through? Did they’ve a death wish or were they acting out a written script? If those youths that blocked the highway hadn’t been Shi’ites or belonging to a religious sect, would the army officers have pleaded that long for them to give way? If clearing the initial blockade by shooting live rounds at civilians and killing an unspecified number was not enough, was returning in the dead of the night to unleash the fury of the Nigerian Army on the Shi’te sect and their leader justified? Was the demolition of their spiritual headquarters and residence of Sheik El-Zakzaky also justifiable? Could the actions of the Nigerian Amy and Kaduna State Government in this regards be said to be proportionate to the ‘offence’ of blocking the highway and attempting to “assassinate” the chief of army staff?

For a man whose sons and followers were killed in cold-blood over two years ago by soldiers and he did not incite his followers to go on a vengeance spree, did he deserve the treatment meted out on him by another group of soldiers and the Kaduna State government?

I ask these questions because if God forbid, things go awry and Sheik El-Zakzaky’s followers run amok, believe me when I say it, Boko Haram will be child’s play and the devastating effect might just finally mark the end of the north as we know it today.

It is my honest opinion that the Sheik, his wife, all his followers detained and the corpses of those killed by ‘unknown’ soldiers be released unconditionally as a sign of good faith because peace cannot be bought through the barrel of the gun.

Any panel of inquiry to be set up by the government must have fair representation and comprise of men and women of unquestionable integrity. That way, the outcome and recommendations of the panel will be acceptable to all.

All the ‘unknown’ soldiers that shot at civilians and those that carried out the raid at night, must be identified and brought to book to serve as deterrent and re-affirm to Nigerians and indeed the rest of the world, that it is no longer business as usual with the ‘new sheriff’ in town.

Likewise, the Sheik must be made to sign an undertaking that his followers will subject themselves to the laws of the land and no longer see themselves and their activities as above the law. In this light, the Shi’ite sect must subject itself to laws regulating religious activities in Kaduna State. They must also be made to sign an undertaking not to inconvenience other road users and their host communities as much as they have the right to worship.

Finally, the government should endeavor to pay compensation to the Islamic Movement in Nigeria for damages done to their property and if possible, relocate them to somewhere where their activities though not far away from scrutiny, would also not pose a hindrance to socio-economic activities of the overall populace.