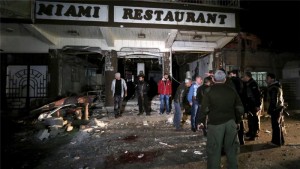 Several people have been killed in rare clashes between Assyrian Christians and Kurds in Syria’s al-Hasakah province, Al Jazeera has learnt. The province in the northeast of the country is divided and in parts controlled by the Islamic State of Iraq and the Levant (ISIL), Kurds and Assyrians. Aljazeera reports:

Assyrian and Kurdish sources said there were casualties among fighters in the battle between the Kurdish People’s Protection Units (YPG) and Assyrians in the city of Qamishli on Tuesday.

“The city of Qamishli is controlled by Assyrians, but surrounded by Kurdish fighters. The Assyrians were trying to set up checkpoints and were fired at by the Kurds,” Afram Yakoub, the chairman of the Assyrian Federation of Sweden, which monitors news related to Assyrians across the region, told Al Jazeera.

He said at least one Assyrian and eight Kurdish fighters were killed. Taj Kordsh, a Kurd from the Syrian Democratic Forces (SDF), confirmed that the clashes broke out because of the checkpoints, but gave a different death toll.

“Two Assyrian fighters were killed in the clashes and five others were injured,” Kordsh said.  He added that a civilian had also been killed. “Kurdish fighters say these checkpoints have bothered residents and must be removed,” he said.