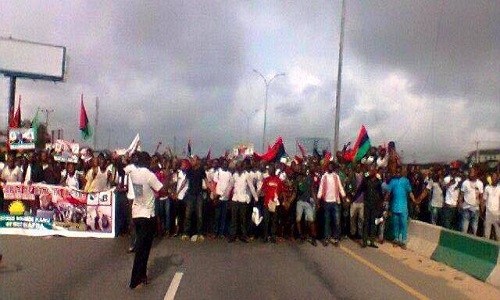 The Secretary to the Government of the Federation, SGF, Engr. Babachir Lawal, has urged leaders in the South East geo-political zone to call pro-Biafra agitators to order.

The SGF condemned the activities of the groups, saying they threaten the peace of the country.

The Movement for Actualisation of the Sovereign State of Biafra (MASSOB) and the Indigenous People of Biafra (IPOB) have been in the forefront of protests calling for the creation of a Republic of Biafra.

Mr. Lawal, who spoke in Abakaliki, the Ebonyi State capital, during a one-day working visit to the state, said the protesting youths were misguided by causing crisis in the country and called for an end to their activities.

According to the SGF, by agitating for a Biafran republic, the protesters were creating the impression that Nigeria is not one and advised leaders in the South East to create employment opportunities for the youth to keep them busy to stop them from engaging in acts that threaten the peace of the nation.

“These misguided youths create the impression that Nigeria is not one, and insecure”, he said.

Responding, the state governor, David Umahi, said he would ensure improved welfare of the people and rapid development of the state.

The governor, who thanked God for making the visit of the SGF a reality, attributed his achievements in office to the handiwork of God.