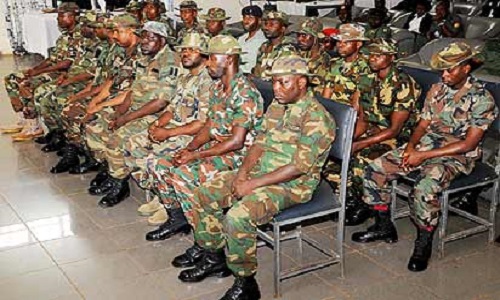 The over 3,000 soldiers, who were pardoned last August for various offences ranging from disobedience to desertion, while fighting the Boko Haram insurgency in the northeast, have rejected their postings to the battlefront, Vanguard reports.

The soldiers hinge their refusal to be redeployed in the theatre of operation to their conviction that they were not really pardoned and re-integrated into the Army, but rather, re-sentenced to the war front.

According to the newspaper report, the unfolding development has created anxiety at the Command and Staff College, Nigerian Army School of Infantry, NASI, Jaji, Kaduna state, when the affected soldiers – who claimed to have been subjected to unimaginable ill treatment after their pardon – were gathered by the Commandant of NASI, Major General Kassim Abdulkareem, to inform them that they have been assigned new riffles and should be ready for deployment to the fronts on the 11 January, 2016.

Citing multiple sources, the report states the soldiers complained that they had not been fully re-instated into the Nigerian Army, because their attempts to report to their units was rejected at their bases since they were not issued letters of re-instatement.

The soldiers also lamented that their families were subjected to dehumanizing conditions and have resorted to begging to survive since they were kicked out of the barracks and their salaries stopped for seven months.

It was gathered that, they cried, “We are not going! Give us re-instatement letters! You are sentencing us back to war”, among others.

According to sources, the commandant had to leave when the soldiers became unruly and uncontrollable.

One of the soldiers, who spoke to some reporters under the cover of anonymity, said: “Look at me; I have put in about 28 years of my life serving this country. I have seen action in Liberia; I have been to Rwanda, Sudan and even served overseas and we the Nigerian troops did very well and were decorated in some occasions.

“But, our experience in fighting to save our motherland is too sad a story for the outside world to know. We are not cowards. We held on for over four months facing Boko Haram.

“I just want to say that after the Army dismissed about 5,000 of us, 3,032 of us were pardoned last August. Since that time, the Army Authority has treated us like prisoners of wars”.

Continuing, the soldier said they were asked to report at Jaji on August 17, 2015 which they complied. Two days after their arrival at the cantonment, he disclosed that the General Officer Commanding, GOC, 1st Infantry Division, Maj. Gen Adeniyi Oyebade, gathered them together and without prior notice, moved them to the Nigerian Army training Centre, NATRAC, in Kontagora, Niger State.

“Some of us found ourselves there in bathroom slippers. We were just taken straight to the place. Then, without any additional clothes or uniform, we were subjected to what was clear punishment, not training for another three weeks.

“Still in the clothes we came, we were again relocated to 333 artillery Barracks, Njetilo, Maiduguri. We got nothing but constant insults as cowards. We were there without uniforms no arms. They just left us there and we were abused and told to assemble at every two hours through these days for another three weeks.

“In Jaji, we went through another round of punishment, not training. Yet, we were not given any letter to show that we are still serving soldiers.

“So when the Commandant came and said we were going back to the North East, without clearing our status, we felt we have been punished enough”, he said.

His account corresponds with a special report by Al-Jazeera last October (read here), where some pardoned soldiers at the NATRAC alleged that they were not properly re-trained nor given any kits.

The Public Relations Officer, PRO, of the Nigerian Infantry Corps, Major C.K Abaide, when contacted on the matter, said he was not aware that the reinstated soldiers rejected their redeployment.

“I shall reach you back immediately I have our side of the story”, he said, but never did at the time of publishing this report.