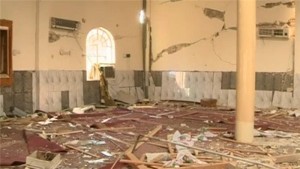 Three Sunni mosques in Iraq have been bombed and partially destroyed while at least two people have been killed in suspected retaliation for the execution of a Shia leader in Saudi Arabia, officials and police say. Groups of men wearing military uniforms detonated explosives at two mosques overnight in the Hilla region, south of Baghdad, while al-Fateh mosque in Sinjar, just outside Hilla, was also damaged in similar circumstances.

Saudi Arabia executed 47 “terrorists”, including the Shia religious leader Nimr al-Nimr and a convicted al-Qaeda leader, Faris al-Zahrani, on Saturday. Saudi Arabia announced on Sunday it was severing diplomatic ties with Iran following an attack on its embassy in Tehran during protests against the executions in the kingdom on Saturday.

In Hilla, about 80km from the Iraqi capital Baghdad, a police officer said the Ammar bin Yasser mosque in the Bakerli neighbourhood was bombed after midnight. “After we heard the explosion, we went to its source and found that improvised explosive devices had been planted in a Hilla mosque,” a police officer said.

Ten houses were also damaged, he said, adding: “Residents said a group of people with military uniforms carried out this operation.” Falah al-Khafaji, a provincial council member, and a police source said that a guard inside the building had been killed. No group has yet claimed responsibility for the attacks.