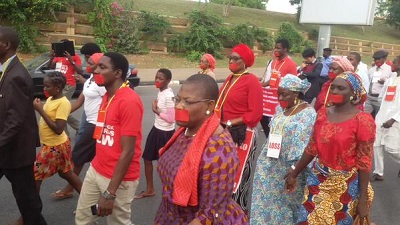 Come January 14, members of the #BringBackOurGirls movement will be marching to the State House, Abuja, to re-engage with President Muhammadu Buhari, the group has said in a statement.

The families of the kidnapped Chibok girls, the Chibok community, and sympathisers of the girls who were abducted from Government Secondary School, Chibok, in April 2014, are expected to be part of the march.

The group said it noted with “great dismay” that the issue of rescue of the kidnapped girls and other citizens held in captivity by Boko Haram was not mentioned in the president’s New Year message to the nation.

“The implication of such a deliberate omission is not lost on us”, the group said in a statement signed by its coordinators – Aisha‎ Yesufu, Oby Ezekwesili, and Hadiza Bala Usman.

“We shall meet at Unity Fountain as from 8.30 a.m. that day to proceed on the march. We have already dispatched a letter to the president, duly acknowledged by State House officials”.

‎It would be exactly 21 months on January 14 since armed Boko Haram insurgents stormed the girls’ school hostel in Chibok Borno State, to abduct over 200 girls.

Despite repeated assurances by the government that it would rescue the girls, their whereabouts remain unknown with President Buhari during his maiden media chat last week, saying he was yet to get a “credible intelligence” on the girls’ location.

The #BringBackOurGirls movement noted that the president, during his inaugural speech on May 29 last year, declared that his government would not claim to have defeated Boko Haram until the Chibok girls and other hostages have been rescued.

‎“It was utterly shocking when the president declared in a BBC interview on 24 December that the terrorists had been ‘technically defeated’ without referencing the rescue of our Chibok girls whom he had set as the benchmark for measuring such success. ‎‎

“We are extremely disappointed that seven months after his strong promise at inauguration and six months after his pledge to the parents, Chibok community and our Movement that he would rescue the 219 daughters of Nigeria, his statement was lacking in urgency and assurance of strategy for result.

“Further, that the President gave the impression of a reactive approach of ‘waiting for credible Boko Haram leadership’ to tell us whether our girls are alive or not, falls disappointingly short of the proactive feedback we expected.

“Our Movement therefore refuses to accept that lack of ‘credible intelligence on our girls’ whereabouts” as a tenable reason for the evident lack of progress in rescuing our ChibokGirls”.

The #BringBackOurgirls group, therefore, urged the federal government to make public the General Sabo fact-finding committee report on the abduction of the Chibok girls.

The committee was able to establish that a total of 276 girls were abducted by members of the Boko Haram Sect, but 57 of the girls escaped while 219 were still unaccounted for.

“‎The federal government should investigate all statements preciously made by state actors and/or high-ranking military officers that ‘we know where the Chibok girls are’, with the view to getting at the bottom of the matter on our girls’ whereabouts.

“The federal government should immediately set up a search and rescue team to find our Chibok girls”, the group said.
‎
“KADA (the Chibok community) strongly demands that President Muhammadu Buhari gives the rescue of our abducted Chibok girls the priority attention it deserves; as Boko Haram cannot be said to have been defeated – technically or otherwise – without the safe return of our abducted daughters‎”.