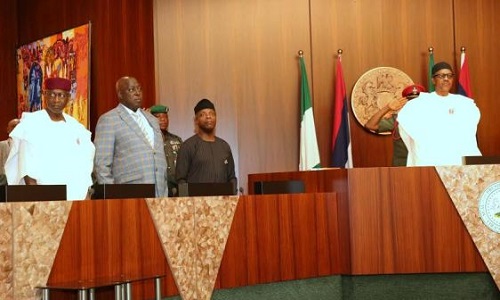 In a move that is bound to keep members of his cabinet guessing on what he has up his sleeves, President Muhammadu Buhari today arrived at the Council Chambers at exactly 9.50am for the Federal Executive Council (FEC) meeting, the second in 2016.

President Buhari, a known stickler for time, arrived 10 minutes earlier than the scheduled time for the FEC meeting with only 19 out of the 36 ministers around at the time of his unexpected arrival.

The FEC meeting cannot commence until the president is on seat, except he is unavailable and the vice president has to chair the meeting.

“I came too early”, Daily Trust quoted Mr. Buhari as saying. He then called for the recitation of the National Anthem.

They were however not ‘late’ as they arrived five minutes ahead of the scheduled time of 10.00am for the FEC meeting.