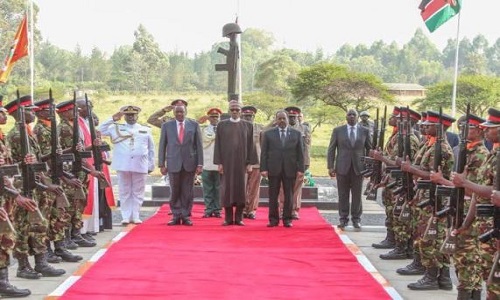 President Muhammadu Buhari on Wednesday in Eldoret, Kenya, said the global community must act with more determination and vigour against radicalisation and extremist ideologies, which promote terrorism.

Speaking at a memorial service in honour of Kenyan soldiers killed by Al-Shabaab militants in Somalia recently, Buhari said peace-loving nations of the world must now come together and deal with the threat posed to global security by terrorism with greater zeal and cohesion.

The president’s remarks were contained in a statement issued by his Special Adviser on Media and Publicity, Femi Adesina.

“Terrorists should not have a place in our communities, villages, towns, cities and countries. We must all rise against the culture of intolerance, hatred and extremist ideologies, which drive terrorism.

“We must also act with more firmness against radicalization and all those who promote values and principles that threaten our unity and cohesion as a people.

“Nigeria is willing to work with Kenya, other African countries and the global community at large with a view to defeating these undesirable elements.

“We must take the battle to the terrorists whoever they are and wherever they are. This requires commitment, sacrifice, resources, collaboration and above all a realization that no country is immune to the scourge, as terrorists do not respect national boundaries, race, colour, religion or creed”, President Buhari was quoted as saying.

He also applauded the bravery of Nigerian and Kenyan soldiers, and others around the world “who have remained faithful and committed to the cause of ensuring a secure and peaceful world in spite of daunting challenges”.

President Buhari paid special tribute to the Kenyan soldiers who lost their lives in the terrorist attack on their base in Somalia.

“I wish to use this occasion to pay tribute to all the fallen heroes of the El Adde attack and pray for the repose of their souls”.