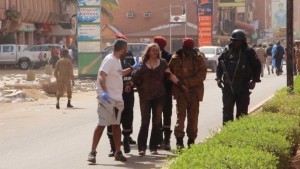 Burkina Faso’s government says 28 people were killed and a further 56 injured after Islamist militants attacked a hotel in the capital, Ouagadougou, popular with foreigners. Al-Qaeda in the Islamic Maghreb (AQIM) has said it carried out the attack, which began on Friday night.

Six of those killed were from Canada, the country’s Prime Minister Justin Trudeau said. Burkina Faso is to observe 72 hours of national mourning for the victims. The siege at the Splendid Hotel was declared over after a joint operation by local and French security forces.

At least four attackers died in the assaults. There were claims that some of those involved were women. As well as the luxury hotel, a cafe and another hotel nearby were targeted. Burkinabe Security Minister Simon Compoare said 176 hostages had been rescued. The bodies of three “very young” attackers had been found, he said.

In another development, the Burkina Faso government said a foreign doctor and his wife were kidnapped on Friday night in the north of the country, near the border with Mali. There was initial confusion over the pair’s nationality – the Burkinabe government said they were Austrian, but later corrected this to Australian. In November, an AQIM attack on a hotel in Bamako, capital of neighbouring Mali, left 19 people dead.