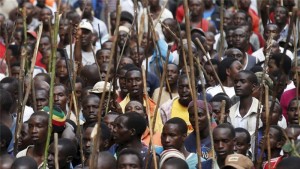 Burundi said it has the backing of other nations in refusing to accept an African Union (AU) peacekeeping force as leaders from across the continent met ahead of an unprecedented vote on the potential deployment of 5,000 troops to the crisis-hit country.

Talks at the AU Peace and Security Council in Ethiopian capital Addis Ababa, attended by presidents and foreign ministers as well as UN Secretary-General Ban Ki-moon, stretched late into Friday night in a bid to narrow positions before the opening of a summit on Saturday. AU Peace and Security Council chief Smail Chergui said “the stakes are indeed high”, but Burundi remained defiant in its opposition to a mission it describes as an “invasion force”.

Burundi’s President Pierre Nkurunziza is not attending the talks, but foreign minister Alain Aime Nyamitwe insisted he had the support of other nations in opposing such a deployment. When asked whether he had the backing, Nyamitwe replied with an emphatic: “Yes, very strong, you will see”, according to a report by the AFP news agency.

Al Jazeera’s Catherine Soi, reporting from Addis Ababa, said that many people there believed that “African leaders will be reluctant to endorse such a move because Burundi is a sovereign country. “It has an elected president, it has an elected government – even if that election is contested – so what perhaps might happen is that these leaders might push more aggressively for political dialogue, a political solution to move the country forward.”