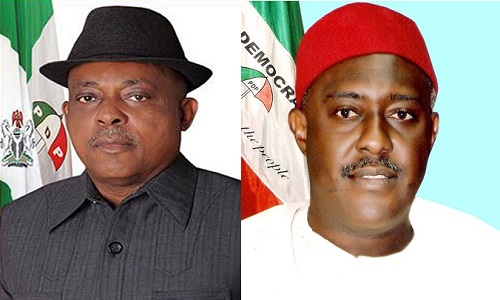 The national leadership of Peoples Democratic Party, PDP, has warned those it labeled as fifth columnists, to desist from making political capital out of the present challenges confronting the party.

Some members of the National Working Committee (NWC) of the PDP had yesterday demanded that National Publicity Secretary, Olisa Metuh and acting Board of Trustees (BoT) Chairman, Dr. Bello Haliru Mohammed, who are both standing trial over alleged involvement in the $2.1 billion arms deal scandal, should step down to face their trial.

The members of the NWC, four in number, in a statement, said it had become absolutely necessary for the two party chiefs to step down until their trial is concluded.

They also called on the acting national chairman of the PDP, Prince Uche Secondus, to revert to his position as Deputy National Chairman in accordance with the judgment of an Abuja High Court, which declared his occupation of the seat as illegal.

But a statement by the party’s National Secretary, Prof. Wale Oladipo advised members of the party to engage in efforts that would rebuild the PDP, rather than make utterances that seek to further discourage and create division within its fold.

The statement said: “The attention of the national leadership of the PDP has been drawn to reports in the media credited to some members of the party regarding the on-going ordeal of some of our leaders with the EFCC as well as issues relating to the position of the National Chairman of our great party.

“Indeed, we understand the concerns of our members especially since the unfortunate electoral setback, its attendant trauma and disagreements within the party as well as the recent development leading to the probing of some of our leaders and of course our campaign funding by the APC-led government.

“In the same vein, we have noted the desperation of some opportunistic and selfish individuals, including those being used by the APC, to draw political capital from the present challenges facing our party.

“While we await the judicial determination of the cases involving some of our leaders at the EFCC, it is important that all party members show commitment to our rebuilding effort by ensuring utterances that encourage and unite rather than further discourage and divide our members. Anything contrary to this would be playing into the very hands of those who want to decimate our party, destroy our common destiny as a people and install a one-party state in our country.

“Our earnest attention for now is our on-going rebuilding efforts, the amendment of our party’s constitution and our scheduled National Convention in March this year to produce new leaders in line with the statutory requirements of our great party. All the statutory organs are aware of the laid out plans by the NWC, which would soon be presented to them appropriately and accordingly.

“The public and the media are by this made aware of the fact that the PDP remains a big family despite our temporary electoral setback. Also, our leadership and statutory organs, the NEC, NWC, Caucus, Board of Trustee, forum of Governors and caucuses of various legislative houses, are all united in the common effort to rebuild and reposition the party, especially with preparations for our National Convention in March”.