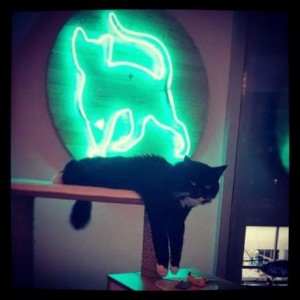 A Canadian cat café was forced to close temporarily after its popularity led to a lack of cats for visitors to adopt. Vancouver’s aptly named “Catfé” is set to re-open on Jan. 8 after a week long closure following a high number of adoptions, among other factors.

“Our aim is to have anywhere between eight and 12 cats at the cafe, which will fluctuate as cats get adopted out and more cats arrive,” a post on Catfé’s website states. “But over the next week, as a result of steady adoptions paired with holiday hours and bad road conditions for our Northern cat transfers, our partners at [British Columbia Society for the Prevention of Cruelty to Animals] have been low on cats to send to us.”

Catfé owner Michelle Furbacher told the CBC that she was aware this type of shortage was a possibility, but hoped the café would be able to keep its doors open for customers whether they were looking to adopt or not. “Obviously, we were hoping not to have to be closed,” she said. “We want the cats to get adopted, but we also want to have a space where you can just go hang out with the cats even if you’re not necessarily looking to adopt.”

While the café may have been short on cats for a week, Catfé’s website insisted that there is no shortage of cats in need of adoption in the area. “Please note there is not a shortage of adoptable cats in the Lower Mainland, and the BC SPCA only sends us their most special cats,” they wrote.