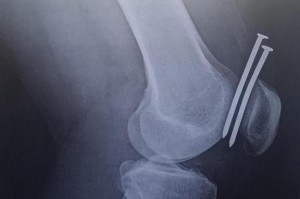 A Chicago man who had an unfortunate encounter with a nail gun on his second day of carpentry shared X-ray images showing how the two nails just missed his bones. The man, posting on Imgur as ILLMATIC1994, shared photos of the two nails embedded in his knee as well as X-ray images showing how the nails narrowly missed striking his bones. “Condos we were framing near Wrigley Park in Chicago. I was all the way up top sheeting the roof when I had to step over the gap left between two units for a fire wall. [Accidentally] stepped on the gas hose connected to the gun, gun jerked forward, met perfect with my knee, [that’s] all she wrote,” wrote the man, who gave his first name as Jesse.

The man said adrenaline initially prevented him from feeling any pain from the embedded nails, so a cherry picker brought him down to the ground and a coworker drove him to Swedish Covenant Hospital. “Doc tried to numb the area and yank them bad boys out. Nails.did.not.budge. after lifting my entire leg off the bed numerous times, he realized that due to the outward facing prongs I would need surgery,” he wrote. Jesse said he underwent surgery 11 hours later and the nails were removed.

Doctors said he very narrowly missed puncturing his femoral artery, which could have been a life-threatening injury. “I had 6 doctors come into my room to tell me how lucky I was. All the years spent at a hospital in the lovely Chicago area and they had never seen such superb aim,” the man wrote. Jesse said the accident happened on his second day as a carpenter’s apprentice, which also turned out to be his last day. He said he has since moved to a different job “behind a desk.”