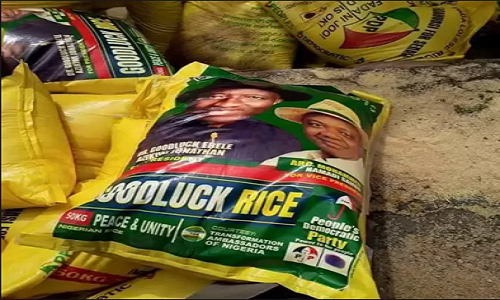 The Edo State chapter of All Progressives Congress, APC, has waded into the controversy surrounding the alleged diversion of campaign rice meant for the state by the campaign organisation of former President Goodluck Jonathan by a Peoples Democratic Party, PDP, governorship aspirant in the state.

The Edo APC described as laughable, the defense by its PDP counterpart that none of its aspirants for the 2016 governorship election in the state diverted the rice and vowed to take evidence of the fraudulent act to the Economic and Financial Crimes Commission, EFCC, and the Presidency for probe.

Some leaders of the PDP, led by Okharedia Ihimekpen, had raised alarm last week, alleging that the governorship aspirant seized the rice meant for PDP members during Jonathan’s presidential campaign and shared it to his supporters this last Christmas.

They urged the EFCC and the Presidency to probe the matter, adding that it was the same way that funds meant for the Jonathan’s election were siphoned in the state.

In a swift reaction to the allegation, the state PDP, through Mr Chris Nehikhare, described the claim as untrue, insisting that none of its governorship aspirants diverted any rice, Vanguard reports.

The denial notwithstanding, the APC in the state through its state Publicity Secretary, Godwin Erhahon, who displayed the rice to journalists, said the PDP members who were allegedly denied the rice, brought it to him.

The 2KG bag of rice with a sticker of the PDP governorship aspirant on it, was super-imposed on a map of Nigeria with the inscription “Feed Nigeria Campaign 2015”.

“You can see that originally, what was written on the sack was Feed Nigeria Campaign 2015. But the aspirant super-imposed his campaign sticker on it. Can somebody who is running for governorship write ‘Feed Nigeria Campaign’ in the rice he wants to share to his supporters? No. Rather, it should have been feed Edo State”, Erhahon said while displaying the rice to journalists.