Some female lawyers in Abuja have advised the Federal Government to create rape crisis centres, counselling service and other victims assistance agency as measures to address the menace of rape. 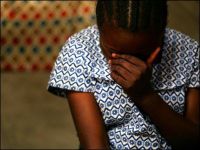 The lawyers gave the advice in separate interviews with NAN on Sunday in Abuja.

They noted that the creation of such institutions would help in addressing the high rate of rape and its attendant effects on the victims.

A lawyer, Mrs Chinelo Oputa, told NAN that rape incidents were increasing in different parts of the country and there was an urgent need for government to assist the victims.

Oputa said that effective and well managed crisis centres and counselling units would help the rape victims to learn how to cope with the emotional trauma and physical impacts of the assault.

The lawyer identified impunity as a major factor for the high rate of rape cases.

She said that reported cases of rape were, in most cases, not properly investigated before charging suspects to court resulting in letting the suspects off the hook or giving them light punishments.

Oputa said that this accounted for many offenders to see rape as a joy ride and therefore encouraged to keep perpetrating the crime.

She urged the police to conduct proper investigations when cases of rape were brought to them and ensure that the perpetrators pay dearly for their crime.

Oputa said that rape is a very serious crime and the offender must be made to face the full weight of the law.

“Despite the prevalence of rape and violence cases, offenders are neither arrested nor prosecuted.

“Even when arrest is made, prosecutors are often reluctant to take on such cases seriously,” she said.

Another Abuja-based female lawyer, Mrs Oluwaseye Odediran, said that most rape victims in the country lived with the trauma because of lack of counselling.

She said that some of them develop phobia for men and see all opposite sex as evil.

“Investigations and researches have shown that many rape victims get involved in homosexual and detest marriage if there is no adequate counselling,” she said.

Also speaking on causes of rape, the lawyer identified poor parenting as a key factor.

“Many parents are no longer paying adequate attention to their kids; not knowing the whereabouts of their children and who could abuse them if there is an opportunity.

“Parents should be sensitive to those picking and dropping their children at schools,” she said.

She added that parents should watch out for those who have access to their children and who could abuse them.

Odediran also said that rape victims should be encouraged to report the crimes instead of keeping it to themselves.

According to her, some parents prefer keeping rape and other sexual abuse incidents involving their children or relatives to themselves thereby allowing the perpetrators to go scot-free.

She said that those parents believed that reporting such cases to the authorities would expose the victims to stigmatisation and affect them psychologically.

“Sexual violence is a serious social problem that deserved serious attention and all hands must be on deck to ensure that the perpetrators of this violence should be prosecuted,” she said.

“Young girls nowadays dress in such a way that some parts of their bodies are not covered.

“They dress exposing their bodies and that can also attract men who cannot control themselves into raping them,” said Femi.

She stressed that government should assist in organising sensitisation programmes in communities and schools on rape, management of victims and what could be done to prevent the menace.