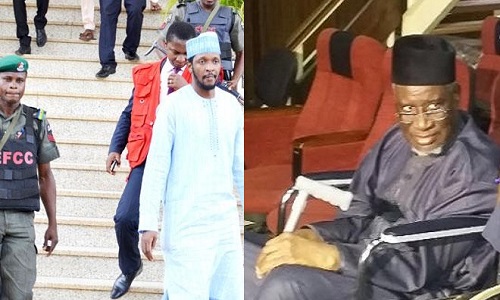 A Federal High Court in Abuja has granted bail to a former national chairman of the Peoples Democratic Party, Haliru Bello, and his son, Abba, two days after they were arraigned on money laundering charges.

Recall that the accused persons were on Tuesday, docked before the court by the Economic and Financial Crimes Commission, EFCC, on a four-count criminal charge‎ bordering on alleged N300million fraud‎.

Equally charged before the court was a private firm, BAM Projects and Properties Limited, which the EFCC said was used to perpetuate the fraud.

The former PDP chairman and his son were accused by the EFCC of using the firm to withdraw the sum of N300m from an account the ‎Office of the National Security Adviser, ONSA, operated with the Central Bank of Nigeria, CBN.

The fund was allegedly transferred to the accused persons some few days to the 2015 presidential election by the embattled former National Security Adviser, NSA, Sambo Dasuki.

Granting the accused bail in the sum of N300 million each, the judge, Ahmed Mohammed, ruled on Wednesday that the affidavits before the court showed that Mr. Bello’s and his son’s claim of ill health, did not appear to be false.

He noted that the first defendant, Abba Bello, was said to have bronchial asthma, while his father, who was brought to court on a wheel chair on Tuesday, had only recently had surgery for an injury in the spinal cord.

“Then it will be most unfair to refuse the bail application”, Mr. Mohammed said.

The judge also ruled that Abba and Haliru Bello must produce two sureties – the one to stand for the former PDP chairman must be a director under the employ of the federal government or any of its agencies while the second, who will stand as surety for his son, must be a civil servant not below the rank of grade level 12.

In addition to the bail condition attached for Abba, his surety must be an owner of landed property in Abuja the value of which must not be below N300m and the title deed of such property must be verified and surrendered to the court registrar throughout the duration of the trial.

Both sureties are also to swear to an affidavit of means, as well as tender their recent passport photographs to the court.

Justice Mohammed also ordered the defendants to submit their international passports to the court.

Pending the perfection of the bail terms, the judge ordered that Abba be remanded in prison custody while his father should remain in hospital but placed under surveillance by the Inspector General of Police.

The court adjourned till February 16 for commencement of trial.