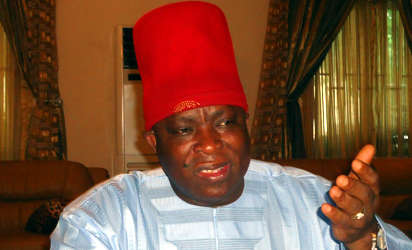 A former National Chairman of the All Progressive Grand Alliance, APGA, Chief Victor Umeh, weekend dismissed claims in some quarters that the anti-corruption of the President Muhammadu Buhari administration was an act of selective justice.

Umeh, who described the ongoing war on corruption in the country as an in house cleansing, urged Nigerians at all levels to allow the vices in the country to be removed to pave way for national healing and restoration to take place in every sector of the Nigerian economy.

The APGA candidate for Anambra Central senatorial election, insisted that anybody or group of persons hindering or criticizing Buhari’s war against corruption is not being honest and sincere about moving the nation forward.

“Nigerians should allow the vices in the country to be removed and healed; when someone steals and you say the person should not be prosecuted, we are not being honest to ourselves.

“Corruption must be dealt with in this country; there is nothing like selective justice system in Buhari’s war against corruption in the country”.

On the Appeal Court ruling on Abia State governorship election, the APGA chieftain, who applauded the judiciary for doing the right thing, described the court verdict as the most popular decision in Nigeria’s judicial system in recent times.

“The Court of Appeal in Abia state did the right thing by restoring the peoples mandate to Dr. Alex Otti of Abia state who actually won the election in all facets; I wept when an obvious victory that was won by Otti was given to someone else.

“The ruling reinforced my confidence in the judiciary despite the fact that the judiciary has not lived up to its expectations in some matters; however, the ruling gladdens the heart of people; it is the most popular decision delivered by the court of Appeal. Everybody knows that Dr. Alex Otti won the election in landslide victory”.