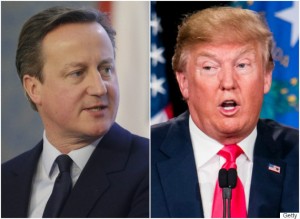 British Prime Minister David Cameron on Friday accused Donald Trump of making it more difficult to defeat Islamic State extremists. Speaking to the US website Mic.Com, the Tory Party leader said the billionaire was making the “fundamental mistake” of trying to blame all Muslims for the violent ideology of a minority while praising Islam as a religion of peace.

Trump, currently leading national polls to be the Republican Party nominee ahead of the Iowa caucuses on Feb. 1, sparked international censure in December after he demanded all Muslims be barred from entering the US following the Paris massacre. The property tycoon also claimed parts of London were “so radicalised” police were “afraid for their own lives.” The accusation was quickly denounced by Westminster.

This week, members of parliament debated whether the property tycoon should be allowed to enter the UK after more than half a million people signed a petition demanding the Government exclude him over his Islamophobic comments. Last year Cameron denounced Trump’s remarks as “divisive, stupid and wrong.”

Should Trump win the nomination, and then triumph in the general election in November, Cameron’s remarks could place considerable strain on Anglo-US relations. Speaking to the website, the prime minister said Trump is making the “fundamental mistake of trying to blame all of Islam and all Muslims for what is the ideology and the actions of a minority, and I think that’s wrong.”