Davido’s Elder Brother Brags: “We Don’t Depend On Our Father’s Wealth” 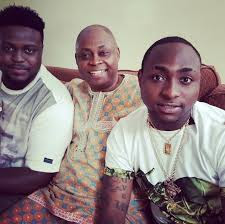 Davido, who days ago officially signed a record deal with Sony Music at their headquarters in New York, has been over the moon with excitement.

One of his family members who is proud of him is his brother, Adewale Adeleke, better known as HKN Chairman.

Adewale Adeleke has gone on to state that they have been succeeding without making use of their father’s investment.

He explained that they both started the journey in 2011 and made a major break in 2016 which shows they are working real hard without depending on their father’s wealth.

According to him, “Forget that me and Davido’s father is a billionaire! We hustle like we still ain’t made it reason why we on top! We started this ish is 2011 it’s 2016 and we got a major record deal!”

With the new deal, Sony records will help Davido create, distribute and market his music at a world class level.