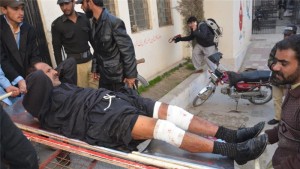 At least 14 people have been killed and 20 others injured in an explosion near a polio vaccination centre in the city of Quetta, police have told Al Jazeera. Rescue teams shifted the victims to the Civil Hospital in Quetta, the provincial capital of Balochistan province, where an emergency was declared after Wednesday’s blast.

Al Jazeera’s Kamal Hyder, reporting from Islamabad, said most of the dead were security forces on their way to guard the polio vaccination centre, which was in the last day of a programme. “One passer-by was also killed in the explosion,” Hyder reported.

The attack comes after the anti-polio campaign was relaunched in Quetta and other districts of Balochistan on Monday. Pakistan remains on the World Health Organization’s (WHO) list of polio-endemic countries. Last year, 49 new cases of polio were reported in Pakistan, a huge drop from 282 in 2014.

The campaign faced threats against polio vaccination teams issued by armed religious groups such as the Pakistan Taliban (TTP) and its allies in the past.