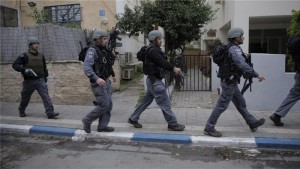 A deadly shooting incident has killed at least two people in the Israeli city of Tel Aviv, leaving at least seven others injured, according to a spokesman.  The attack, which targeted a bar on Dizengoff Street in central Tel Aviv, took place at 3:00 pm local time on Friday afternoon, Micky Rosenfeld, Israeli police spokesman, told Al Jazeera by telephone.

The suspect has been identified as Nesha’at Milhem, a 29-year-old Palestinian citizen of Israel from Arara, a town in central Israel.  Local Arabic-language media reports said that Milhem, who did a stint in Israeli prison in 2006, was identified when his father called and informed police after seeing him on television.

Israel’s Channel 2 also noted that his cousin was shot and killed by a police officer in 2006.   Rosenfeld said the assailant is still at large and that Israeli police “are searching Tel Aviv”. In a subsequent Twitter update, Rosenfeld said that “building[s] and apartments [are] still being searched”.

On Friday night, Israeli Public Security Minister Gilad Erdan told Israel’s Channel 2 that the motive behind the attack is still unclear. “There is no definitive indication that this was a nationalist act,” he said.  CCTV footage the incident, which Al Jazeera could not independently verify, was posted on Twitter. It depicted the shooter opening fire with an automatic weapon as pub patrons jumped for cover.