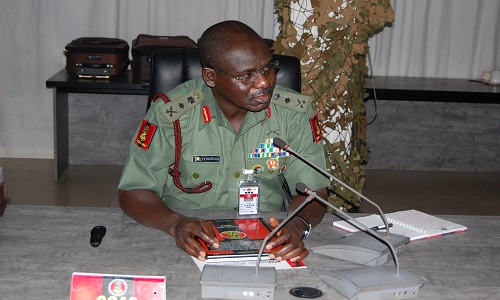 In a move that is set to cause disquiet in the top brass of the Nigerian Army, the Chief of Army Staff, Lieutenant General Tukur Buratai yesterday, ordered all officers under his command to declare their assets immediately.

The order came on the heels of recent revelations by a presidential audit committee on purchase of arms and munitions, which indicted serving and retired top officers of the Nigerian Army and Air Force in the misappropriation of billions of dollars.

General Buratai said it had become necessary for serving officers of the Nigeria Army to make public their acquired assets because they all have the presidential commission, which makes them public servants.

The directive was contained in a statement issued by the acting director, Army Public Relations, Colonel Sani Usman.

According to Col. Usman, the army chief gave the directive during a conference with principal staff officers and directors serving at the Army Headquarters.

“This directive is in order, considering the fact that all military officers are having the Presidential Commission and are public servants, as well as subject to both civil and military laws. In addition, given the current drive of the country for probity and accountability, the Nigerian Army should not only key in but should be one of the key drivers for such laudable project”.