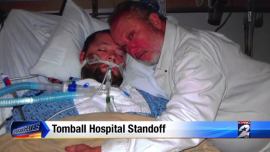 When George Pickering II learned the hospital in which his comatose son was being cared for planned to take him off life support, he did the only thing he could think of: He loaded a gun and held hospital staff hostage until they changed their plans. While his actions may be considered extreme, they ended up saving his son’s life.  George Pickering III was declared brain dead after suffering a massive stroke in January. He spent months on life support at Tomball Regional Medical Center in Texas before hospital staff decided there was nothing more they could do for him. They ordered a “terminal wean” to slowly take the 27-year-old off life support. Fifty-nine-year-old Pickering II, however, was convinced his son wasn’t brain dead and was determined to show the hospital staff he was right.

“They were saying he was brain dead, he was a vegetable,” said Pickering II, according to KRPC. “They were moving too fast. The hospital, the nurses, the doctors.” In an act of desperation Pickering II pulled out a 9-millimeter handgun while standing at his son’s bedside. Eyewitnesses said he yelled, “I’ll kill all of you,” as he pointed the weapon at hospital workers, KRPC reported. Although a SWAT team was able to quickly disarm him, it wasn’t until three hours later that he felt his son squeeze his hand on command, and subsequently agreed to leave the bedside.

Pickering II was arrested and charged with two counts of aggravated assault with a deadly weapon. He admitted to being drunk and acting aggressively, but pleaded his reasoning was out of desperation to save his son’s life. “At that point I had blinders on. All I knew I just needed to have this time with George,” he said.

Pickering III eventually awoke from his coma, and today he’s fully recovered from the incident. As for his dad’s actions on that day, he had this to say: “There was a law broken, but it was broken for all the right reasons. I’m here now because of it. It was love, it was love.” In a statement to KRPC, the hospital claims that although it will recommend plans of care for patients, it is up to the “appropriate decision-maker” to decide whether or not to go ahead with the recommended care plan. However, due to privacy issues, the hospital did not disclose who Pickering II’s “decision-maker” was.