Doctor Kills Patient With One Punch 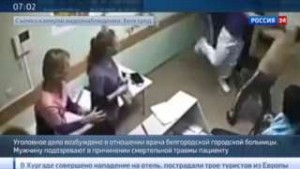 CCTV footage has emerged of a Russian hospital doctor punching a patient who collapsed and later died. The incident took place in the city of Belgorod, 670km (440 miles) south of the capital, Moscow, on 29 December. The patient had earlier kicked a nurse, after which the doctor punched him in the head, Russian media reported.

Investigators think it was a case of “involuntary manslaughter”, one official told Russian TV, but have launched a criminal case.

The story went viral after the CCTV footage came to light.

Yelena Kozyreva from the local investigations committee said they believed there was no malicious intent in the doctor’s actions. Relatives identified the patient as Yevgeniy Bakhtin, 56, a resident of Belgorod,LifeNews TV reported. The doctor has been named as Ilya Zelendinov, according to the privately owned channel Ren TV.